Yoshinkan Aikido history: from the origins to the present 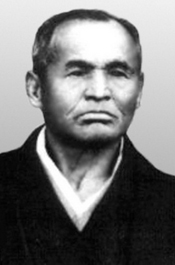 Sokaku Takeda (10th of October 1859 – 25th of April 1943)
The founder of Daitō-ryū Aiki-jujutsu, the predecessor of Aikido, Japanese master of martial arts. One of the greatest Budo masters

Takeda gained the experience not only in the training rooms (dojo), but with the real street fights throughout Japan. He was not high (below five feet) and quite skinny. His outstanding skills were based on great technique, perfect sense of time, mind control and mastery of energy Ki. Takeda managed to resist many attackers by using the principle of Aiki. From 1910 to 1930 Sokaku lived in Hokkaido. Exactly there, in 1915 he met Morihei Ueshiba, his very best student.

Sokaku Takeda was difficult and demanding man. He was a wanderer, used to stand aloof the civilization and traveled to remote areas of Northern Japan. 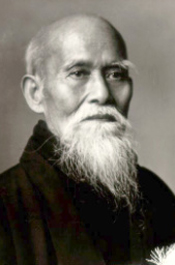 Since his early years Ueshiba was interested in books on mathematics and other sciences, often conducted his own experiments and researches. The ocean was within a walking distance from the Ueshiba house, so he set up the rule during his life in Tanabe each day to spend some time next to the water.

1903 to 1907 Morihei served in the Army, later returned to Tanabe, where he actively participated in local politics, leading the youth association of the city. In 1910 he met a martial arts master Daito Ryu Takeda Sokaku. Intrigued by Daito-ryu technique, he practiced it under the guidance of Takeda.

In 1941, the official Japanese martial arts union had recognized the new martial art called Ueshiba Ryu Aiki-Budo, and in 1942 finally gave Ueshiba name for his style: "The Aikido."

After the war, the Master was getting older and aikido techniques became more and more smooth, the main focus shifted to the philosophical and spiritual aspects of the warrior lifestyle. Students were observing Ueshiba in different periods of his life; they saw him performing aikido in different ways, what led to further creation a number of styles that were quite differ from each other.

Morihei Ueshiba died at the age of 85, leaving behind a sizable legacy.

Currently, there are more than 30 different styles of aikido in the world, the most common are: Aikikai, Yoshinkan, Tomiki Ryu, Ki-Aikido, the number of people practicing this martial art, according to the survey exceeds 1.2 million people

Gozo Syoda (9 вересня 1915 - 17 липня 1994)
Founder of Yoshinkan style of Aikido, Gozo Syoda in his youth practiced the judo. Once in 1932, during a demonstration of aikido techniques (then called Aiki-jujutsu) he was easily tossed by Morihei Ueshiba after some time Gozo Shioda became his disciple. Shioda is known as one of the most famous personalities in the history of aikido. In 1961 he was awarded with ninth dan aikido Ueshiba, and in 1985 the International Federation of Budo gave him the tenth dan aikido and rank Meydzin (Jap. "A Grand Master").

His father had practiced judo in private dojo that was called Yoshinkan. The young Shioda got black belt in judo before going to the high school. He entered the University (University of colonization), but left his studies to get trained as uchideshi (Jap. - Student living in dojo) in Kobukan dojo Morihei Ueshiba.

In those days, aikido was still very cruel style of martial arts and workout in Kobukan was intense. It was the type of training that Gozo Shioda liked, and he tried to maintain it later on when he founded Yoshinkan. Often he with other uchideshi walked in night Tokyo and clashed with bandits, to test their skills, despite the fact that it was forbidden by Ueshiba. Once Shioda and his kokhay started the fight with a yakuza gang consisting of more than thirty members. He managed to win in this battle firstly bringing down their leader. Syoda said that it was a crucial moment of the fight with a lot of enemies. 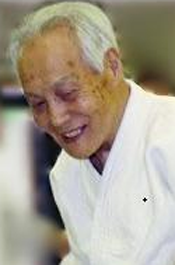 Kieuki Terada 20th of March 1922 – 13th of July 2009
The disciple of Morihei Ueshiba, co-founder of Yoshinkan style together with Gozo Shioda.

He practiced a lot of martial arts, including kendo, karate, sumo, jujutsu. At age of 15 won in championship of judo and got the best judoist reward. In 1950 started working in the military police in Yokohama. In the same year Kieuki Terada begun to train in Aikikai Hombu dojo under the guidance of Morihei Ueshiba. In 1955, together with Gozo Shioda, Terada founded the Yoshinkai style of Aikido. In the period since 1967 to 2009, Coyuca Terada delivered the seminars around the world for the purpose of popularizing Aikido. 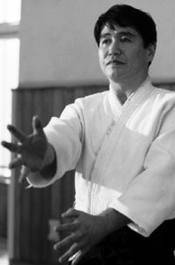 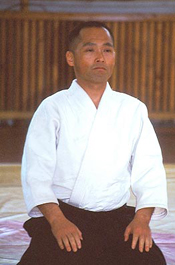 Ando Sensei started learning aikido when he was at university, where he got 2nd dan Aikido. However, soon he switched to Yoshinkan Aikido interested in powerful techniques of Kancho Gozo Shioda. During 14 years Tsuneo Ando studied as "uchideshi". Then he got 6th dan and the title "Sheehan". They say that Ando is the closest to Gozo Shioda in terms of speed, size and style of techniques.